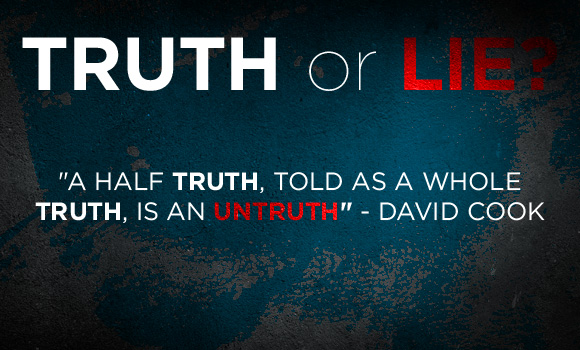 The theme of the weekend was Temptation. The speakers were David Cook and Justin Mote. The teaching on the weekend was so good, that I’ve started listening to the talks again. You can get them here. One quote, or theme from the weekend has stood out to me time and time again. It is this.

The quote comes from David Cook’s sermon on Genesis 3 and the fall. In Genesis 3 the serpent gets Eve to eat the fruit through many small half truths about God and what he had told Adam.

1 Now the serpent was more crafty than any other beast of the field that the LORD God had made. He said to the woman, “Did God actually say, ‘You shall not eat of any tree in the garden’?” 2 And the woman said to the serpent, “We may eat of the fruit of the trees in the garden, 3 but God said, ‘You shall not eat of the fruit of the tree that is in the midst of the garden, neither shall you touch it, lest you die.'” 4 But the serpent said to the woman, “You will not surely die. 5 For God knows that when you eat of it your eyes will be opened, and you will be like God, knowing good and evil.” 6 So when the woman saw that the tree was good for food, and that it was a delight to the eyes, and that the tree was to be desired to make one wise, she took of its fruit and ate, and she also gave some to her husband who was with her, and he ate.

From this passage, I’ve been trying to reflect on how the serpent (satan) tells me half truths in order to tempt me. And also the times when I tell half truths, and how I can stop doing it.